In this delightful interview, Elaine Nelson and Clella Schneider share their impressions of Yoga and how (to their surprise) it has impacted and transformed the quality of their lives.
What You'll Need: No props needed

Go to this Show Season
This Episode
Elaine and Clella, our students in this season share their experience with yoga. 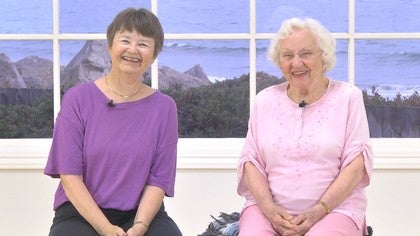 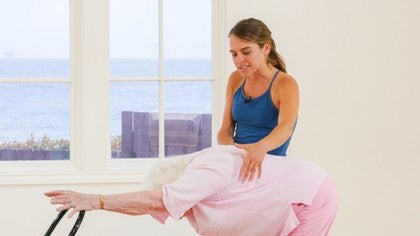 Active Feet and Legs
Alana Mitnick
Beginner
35 min
Senior Yoga
Hatha
Alana shares a safe and effective shoulder opening sequence at the wall which increases the range of movement in the shoulders. 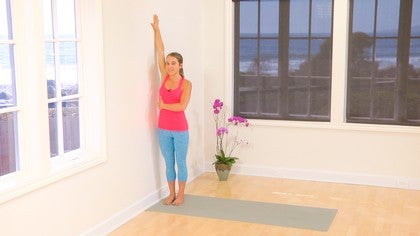 Mary Ellen G
1 person likes this.
What Lovely inspiration you both are. Everything that you said is perfect for me right now. I couldn't use it for a while after some injuries, or didn't ( I tried to substitute Massage ) ; So especially that advise. These are two Truly wise and Beautiful women- Wow 92! Until I up for public classes you are my Yoga people. I think that the creation of peers and interacting is so important too. My daughter is a Yoga teacher and most of her friends all met either through the class or through someone she knows from there. She has so many friends that she of course doesn't have as much time with me as I would prefer! I am so glad that she is so happy. You all too. I will definitely recommend these online classes even just for when it is impossible to make it to a class in a live studio. Love, Pride and Joy. Mary - MaRay

Alana Mitnick
2 people like this.
Dear Mary Ellen, We are so delighted that you are practicing with us! Elaine and Clella such an inspiration! They are a continual reminder of how yoga supports a vibrant and health life. So happy to be in this together. Love, Alana

Carol T
What lovely inspirational ladies, Thank you both!

Alana Mitnick
1 person likes this.
Hi Carol, Thank you for being here! Aren't they both such an inspiration?! Reminds me that it's never too late in life to start practicing yoga, and that it doesn't take much to feel better.

Carol T
Thanks for reply, have a happy week!
Top Skip to Latest